skip to main | skip to sidebar

I just can't seem to get enough pumpkin!  I've been going through the pumpkin I bottled last year like a crazy woman.  Really.  My kids think I'm crazy!  Luckily, my mom is a sweet mom and has invited me over to bottle some more pumpkin that she grew this year.  She seems to have a green thumb.  They say the apple doesn't fall far from the tree, but in this case, it's far from the truth.  Unless, of course, you are talking about growing weeds.  I'm mighty good at that one!

Crazy or not, these Pumpkin Poppers are fantastic!  They're moist, tender and oh-so-good!  They remind me of doughnut holes.  And muffins. 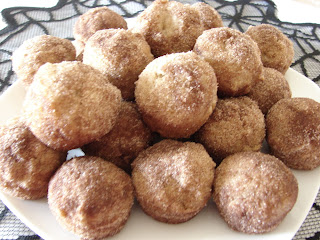 Preheat oven to 350.  Combine flour, baking powder and spices in a small bowl and whisk until combined.  In a medium sized bowl, combine the remaining ingredients.  Add the flour mixture to the wet mixture and mix until just combined.  Grease a mini muffin tin and fill tins until almost full.  Bake for 10-12 minutes.  While poppers are baking, pour melted butter into a small bowl.  Combine cinnamon and sugar in another small bowl and mix until thoroughly combined.  Let the poppers cool for about 15 minutes, then dip in butter and roll in cinnamon sugar mixture.

Linked on Tatertots and Jello.
Posted by Susan at 5:00 AM

Thanks for stopping by. Feel free to leave a comment - I would love to hear from you.

Susan
I am mom to 5 darling little/big angels. I love to spend time with my family doing just about anything. I love to cook and have ever since I was a kid. Now my kids love to help cook, especially the tasting part. :) I am not a photographer. Never have been and most likely never will be. I am not big into presentation, but think that a picture is nice to have. I really don't even know how to work my camera that I have had for 4 years other than point and click. I just don't do the hi tech, fancy stuff.

Most Loved Posts This Month